Hello all and welcome to another review which has honestly been a long time coming! Last week I ventured out to the much anticipated Celebz which is based in the City Centre (in between the Law Courts and Childrens Hospital). It has been under construction for quite a while teasing passers by but opened last week so me and a friend ventured out to see what we would make of it. 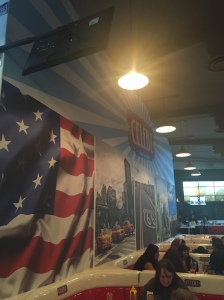 It has an American Diner type feel which you would compare to a Tinsletown / Als Diner. And I have to say it is money well spent, the decor definitely looks the part. The branding is consistent throughout the restaurant and I particularly liked the sewn on badge on the seating area. There is also a big speaker and TV system set up which can often get quite loud which we will discuss later on.

Food: It has a very diner-esque feel and plus your Steaks etc. I went for a Beef burger with my friend opting for a hot dog, both as meals. The hot dog came first and was piping hot and looked pretty special as the pics show and came accompanied with a good set of fries…a good start however this is when it started to go a bit downhill. The Beef burger  came warm at best and had grease dripping out from the bottom which made the bottom bun a tad soggy with the annoying thing was the burger could have been really nice however the little things make a big difference. The drinks were a bit flat we felt and when you are paying a premium price you expect a premium product which I am not sure Celebz delivered on. The fries portions were tiny and inconsistent with the Hot Dog meal having about double the amount of the other meal. 5/10

Service/ Atmosphere: As said earlier they have made a really good restaurant with a strong theme throughout and paid good attention to detail so I really enjoyed eating there and could see it as a good place for both friends and families. People working there were very friendly and our food was served in decent time, just would have liked the burger warmer as said above. Condiments were more than adequate the only thing I would say is there should be tissues in a more easier place to grab rather than going to the till and asking a member of staff.  Parking is a bit of an issue if you are travelling into town especially navigating yourself through all the one way systems but in the evening there should be some free parking not too far away. 7/10

Overall: I would say it is worth to go for the first time however I will not be in a rush to return any time soon. Once the owners have managed to sort out the niggling issues and sorted out the timing of their food which will come with time I will be back in a few months but not rushing back. Als Diner will take care of any future American Diner urges I have for now I think. 6/10